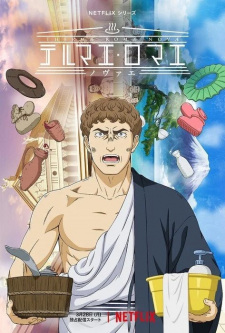 Plot Summary: Lucius Modestus, an ancient Roman architect, finds himself job-hunting due to having trouble coming up with new ideas. As his demeanor and personality become dismal, his friends try taking him to a bathhouse for him to relax. Unable to unwind in the bustling and crowded bath, Lucius dips his head in the water. Down there, he finds a secret tunnel that transports him to a modern-day Japanese bathhouse, providing him the inspiration he needed to make a new creation. Loaded with what seems to be knowledge way ahead of his time, Lucius does his best to try and recreate his findings, usually inferior in quality due to his circumstances. However, the sheer ingenuity may be just enough to gain the attention of the citizens and regain his reputation as an architect.